Is there any questions you still have no answer for that you would like me (or anyone there who is wishes to) ask Polestar?

I'll keep this list updated so new readers don't have to scroll down to see if someone else has already asked something they wish to know.

1. Can you use the front USB's with a memory stick or phone to play audio files?

4. What are the service intervals?

5. When will the lower spec models be available?

6. What controls are locked out of the infotainment system while you're driving?

8. What will the connectivity cost be after the free 3 years?

9. How are OTA updates to the infotainment handled?

10. Any in-built dashcam or something like sentry mode - will it be added?

13. Does the car have wi-fi for other people in the car?

14. The Plugsurf key fob you get in the EU with the car, does it give discounts or some offers or just a free fob?
K

Being fully 'Applefied' the adoption go Google wasn't the bet news for me.

However, I understand that there is supposed to be Apple Car Play connectivity coming soon?

I'm interested to know how it is envisaged this will work - is it the case that the interface will be fully 'Apple' - e.g. will will be saying 'Hi Siri' instead of 'Hi Google' - will we use Apple Maps for navigation etc?

I think it would also be interesting to get confirmation that we can use Volvo dealers if required - or will it be the case that any maintenance issues will be done on-line by them arranging to collect the car from you?

Joined 15 d ago
·
44 Posts
I would have expected CarPlay to in effect be an app that runs on the Google OS so then all your CarPlay stuff appears onscreen on the car’s display. Guessing completely though!
T

When will over the air software updates be available? (at the moment the contract says they are only applied during a service)

What is the service frequency for the UK market

When will the phone app be available, and will that allow, for example, setting the climate on

What charging cables does it come with (UK market)

Does it come with mats

Joined 2 mo ago
·
23 Posts
What is the lead time for the lower spec (2WD) cars and what new colours will be available?
P

Joined 1 mo ago
·
85 Posts
thanks for offering this!

Would be interested in your thoughts on ride comfort/firmness. Can’t tell if the reviewers are harping on it because they need some nit to pick or if it’s a significant thing.
are you testing with 19” or 20” wheels? With/without performance pack?

toscal353 said:
1. When will over the air software updates be available? (at the moment the contract says they are only applied during a service)?

2. When will the phone app be available, and will that allow, for example, setting the climate on?

3. What charging cables does it come with (UK market)?

1. It will be live on the retail cars.

2. It's out now. It's been used for Polestar 1. Yes it allows times and climate settings, plus you can remotely start it with climate settings - note: rear heating seats cannot be turned on atm, but front are good.

4. Yes it comes default with recycled plastic material mats - not super thick carpet, but normal thickness standard mats. You can order plastic mats with a lip around the edge if you wish.

I will be giving my opinions in another thread (probably titled "my thoughts after a test drive" ).

I am most interested in the ride, and It will be easy to tell if the performance pack is being used on not due to the yellow seat belts ... and I will mention that in my review.

I will "try" and be an unbiased as possible, however I have already ordered one so some part of my sub-conscious will be trying to tell me everything is great! I might post the wife's thoughts ... she is far less impressed by stuff. For example she hated my Kia Stinger on the test drive ... so much I thought she wouldn't agree later to buy one! But she said later "it's ok if you get it" ... so that's high praise for her!
F

Joined 2 mo ago
·
17 Posts
CarPlay is delayed till mid-next year. See
https://twitter.com/i/web/status/1253678635665575938
I doubt they'll have (or at least share) more detail on the lower end models. Shipping for the launch edition is slipping already so I doubt they'll want to advertise a less profitable model too early. But hey, it doesn't hurt to ask.

Some of my requests (thanks in advance!)

a) What controls are locked out of the infotainment system while you're driving? I'm worried they won't let you change destinations (via a passenger) or something, or regen rate, etc.

b) How pairing multiple phones works? Which profile will it use and how do you select between them for bluetooth streaming/calls. Also, how do SMS messages on your phone work in conjunction with the infotainment? With Android Auto, when you're phone was the controller, you could have them read to you but now the phone is secondary. Same for other notifications (i.e. whatsapp, etc.)
<edit> answering some of my own questions. For selecting between bluetooth devices, see:
Pure progressive performance | Polestar For SMS see here: Pure progressive performance | Polestar But the latter doesn't address other apps.

c) What will the connectivity cost be after the free 3 years?

d) How are OTA updates to the infotainment handled? How long after google updates android automative till Polestar approves of the update and sends it out? I'm worried about the same problem with Android phones where each manufacturer has to integrate the update into their own software stack, test it, approve it, etc.
F

Joined 2 mo ago
·
17 Posts
I doubt the USB ports support anything but charging. See these manual pages:

Passion and emotion drive us, electricity and innovation drive our cars. We are all in, guiding our industry forward through pure, progressive, performance.

Passion and emotion drive us, electricity and innovation drive our cars. We are all in, guiding our industry forward through pure, progressive, performance.

factor said:
a) What controls are locked out of the infotainment system while you're driving?

c) What will the connectivity cost be after the free 3 years?

d) How are OTA updates to the infotainment handled?
Click to expand...

a) It's been seen in some video's very little is locked. In fact I haven't seen any that I remember. Obviously if YouTube (as an example) is released it will be. They said they will fall in line with the standards provided ... ie. anything that doesn't visually distract you.

c) I suspect "We are still working on that" kind of answer. If you look at Jag/Tesla expect £10 a month (ish)

d) Again I suspect a standard "we are reviewing that process" kind of response, however having owned a One Plus of 3 years now I've never really had a problem with their updates, so have you had a bad experience in the past few years?
F

GDank said:
so have you had a bad experience in the past few years?
Click to expand...

No, but I've been using pixel phones. One Plus has been good, but almost everyone else (i.e. samsung, motorolla, sony, LG, huawei, etc.) has problems with doing updates or how long they support the product. 2 years for phones may be acceptable (that's all you get with Pixels!) but on a car, that's not nearly enough. I'm worried about a repeat of this for the infotainment.

Joined 17 d ago
·
89 Posts
The Youtube part I understand ... they probably need to make sure you can't run while driving. The Music bit does seem odd - however if only 5% of people use Google Music compared to say 80% of of people using spottily then it would make some sense they priorities that first. Not saying that is the reason, but it's a logical guess.

The way I look at it is this: Google sees a massive market in cars for the future. And it make sense ... let the car manufactures do what they do best and the same with the tech giants.

Tesla is a tech company first and car maker second - hence the car side of things problems (build quality, poor parts, unable to fix some issues, lack of service centres, etc..) but excel in the geeky tech stuff.

Google would throw more money at the development of a car entertainment / control system then say Jaguar could, probably more than Audi / Merc! They also want this google system in as many cars as they can ... more cars it's in ... more people sign up to their subscriptions .. more money they make. I mean who isn't using Chrome to post here? (assuming you are not an apple phone)

So I understand concerns but I see the positives of tech company seeing a gap in the market and not only willing but very able to throw stupid amounts of money at R&D for it. My only concern is the same as apple ... when one company knows everything about me.
F

Sorry, I was unclear - I meant YouTube music (their replacement for google music). Although, I do hope that YouTube/Netflix support is added later for parked usage (i.e. while waiting for charging or something).

Also, it's not just about what google wants though. We need all third parties to see the value too so the platform actually takes off. So something like audible for your books, your favorite podcasting app (if it's not PocketCasts or spotify, since those are already supported), Apple Music, etc. Lack of app support is always a death sentence for a platform (see windows phone).

But you're right; if google demonstrates their long term interest and support it'll definitely help the app developers to know their efforts won't go to waste - something they can legitimately fear given google's history of abandoning projects.
T

Joined 1 mo ago
·
58 Posts
It seems to have Google Play, which i assume gives the user control over adding apps? 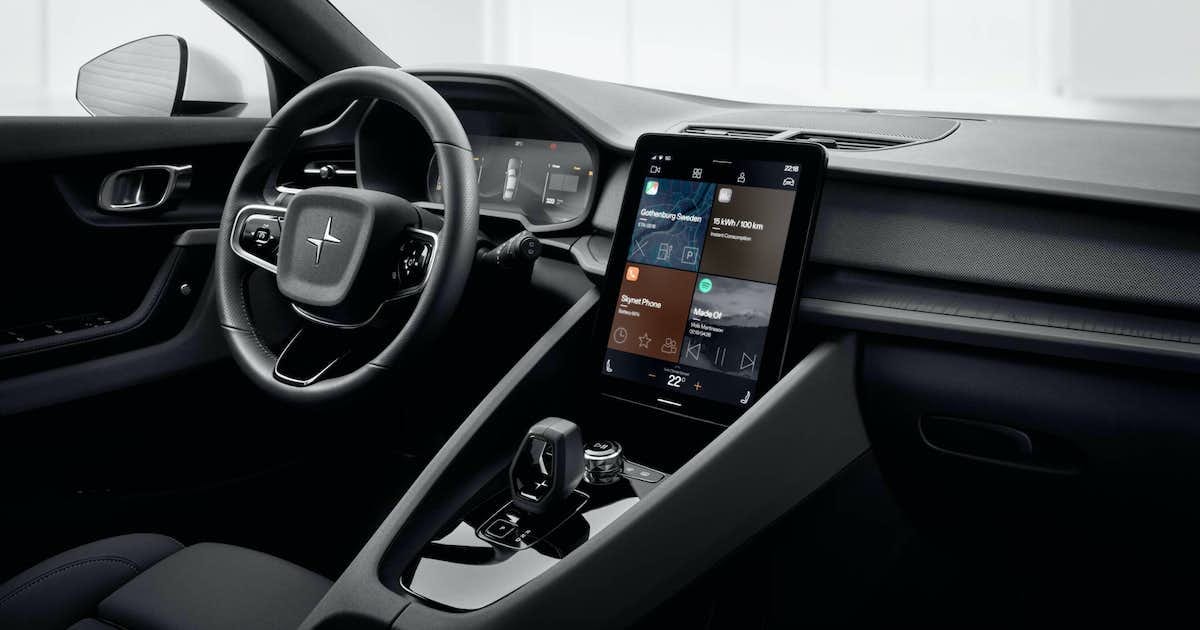 The first ever Google-powered car. Polestar 2 effortlessly integrates with your everyday online behaviour, thanks to Google apps and services.
www.polestar.com

toscal353 said:
It seems to have Google Play, which i assume gives the user control over adding apps?

The first ever Google-powered car. Polestar 2 effortlessly integrates with your everyday online behaviour, thanks to Google apps and services.
www.polestar.com
Click to expand...

Yes, but only apps developed to work on Android Automotive - I don't believe you'll be able to install standard Android apps on it.
T

Joined 1 mo ago
·
58 Posts
Sounds like a work very much in progress! Back to Tesla-type over the air updates, groan.
But, if you have an app on your phone you can link that to the car rather than the car o/s running it directly. I think. Maybe.
Time will tell.

1) Any in-built dashcam or something like sentry mode - will it be added? We could ask the question

3) Would infotainment system support 5G network in the future?

Will add if there's anything else. Thanks 👍

factor said:
Sorry, I was unclear - I meant YouTube music (their replacement for google music).
Click to expand...